Dayshift at Freddy's Wikia
Register
Don't have an account?
Sign In
Advertisement
in: Characters, Humans, DSAF 2,
and 12 more

Deceased (Reasonable side)
Undead (Feral side; as DaveTrap)

Dave appears as his 8-bit videogame sprite, as he is depicted in the mini-games in the original "Five Nights at Freddy's" series, he is a entirely purple with his torso and head being in a different shade from the rest of his body. His eyesocket are black and unmatched with his actual eyes being glowing white. He also wears a yellow badge.

Dave is voiced by a text-to-speech with a thick New-York accent.

Dave signed the red contact cursing himself to be stuck in his job forever, pointing out that he isn't really good at finding a job or he was just neglecting at the time.

Dave appears to be a kind of antisocial jerk, showing no guilts for committing murders, even appears to consider his crimes as casual events with a total cynicism. While he is in overall friendly to the others workers, he would be ready to kill anyone who try to oppose him.

The main reason used by Dave for committing his slaughter is that he wants to shut down the place so he can break free from the pizzeria and going to Vegas.

Dave seems to have an obsession with Jack (and also with the nickname "Old Sport") judging by how he tries to befriend and putting him in his scheme, he even has a file on his computer's profile filled entirely with the world "Old Sport". The reason behind this attraction is unclear, Dave clearly doesn't need help for his plans as he can do it by himself if the player declines the offer. Therefore, declining his offer can turn him into Jack's worst enemy, showing how inconsistent their relationship can be. It's implied that Dave may suffer from Obsessive Love Disorder towards Old Sport.

Dave's goal seems to be that he desires to break free of the contract that binds him to the infamous pizza joint. As he explained in "Dayshift at Freddy's", he seems to have done something that backfired on him horribly, and the company now has 'dirt on him'. In which he can't leave or break the contract. He doesn't go into detail of what he did.

To achieve his goal, he has to kill at least 5 kids to make sure that the pizza joint gets closed down.

Dave's behavior also changes with the choices you make. As he will be more open and 'friendly' when you work with him and more hostile when you refuse him.

Dave also seems to have some form of background with Foxy and a Nevada pizza joint, as a cutscene involves him screaming "PICK UP THE FOX" and "GRAND CANYON.", He picks Foxy up and runs outside just to throw Foxy into a chasm right next to the pizza joint. The reason why he had this sudden change in behavior is unknown.

Dave's behavior in this game determines of which ending you pick at the beginning.

Dave's behavior is a lot more serious and he doesn't seem to be as friendly as he was in the last game. Picking the Crafty Ending can have a major change on his attitude.

As he regards Old Sport as some sort of frienemy.

His behavior is a lot more sinister as he explains that the business is on it's last leg and he wants to finish the job so he can be free. So, he offers up another murder mission.

Refusing the offer makes Purple Man a lot more hostile and accepting seems to please him. Purple Man also seems to be more private and a little more reclusive, depending on which ending you chose, as he will only explain things plain and simple and he seems to get more frustrated the more you goof around.

However, if you side with him after a while he loses a bit of his serious tone when doing certain things, as shown when you are rigging a springsuit to go off or at the end of the Radical Ending.

Dave is the narrator of the Start Your Own Freddy Fazbender's Pizza Kit (1993 Edition). Dave also appears in person in the Flipside. It is explained that this is the reasonable side of his soul, as every time he has died, he has tried to put his soul back into his body, eventually leading to his reasonable side to exist in the Flipside and the feral side to exist in Reality. He also has a story to why he became a serial killer. In The End ending Dave recognises how evil Henry truly is and redeems himself by fighting alongside Jack and others to defeat him.

Dave's relations with Jack vary on which choices you make. As he can come to dislike him or he can become partners with him.

Aubergine Man also seems to have some sort of obsession with Jack in "Dayshift at Freddy's 2: Electric Boogaloo".

Whether or not Aubergine Man has a bone to pick with Jack or it's something entirely different, nothing has been confirmed.

If going by the Evil Ending in DSaF 3,it is shown that The Aubergine Man and Old Sport once worked together and ended up in Vegas after their plan was completed (It was probably during DSaF 2 and it probably was The Radical Ending or Fairly Evil Ending).

Dave's relationship with Phone Guy is complicated. As it seems both of them have a rich history together and seem to know each other very well. Dave seems to take joy in agitating Peter Kennedy by doing obnoxious things, like dropping grilled cheese into the Breadbear 3000 while fixing it, to yiffing the Mangle and breaking her further.

Aubergine Man and Phone Guy seem to get along, however it seems Purple Guy might have some dark opinions on Phone Guy. If Farfour is released, it will say how it will liberate the pizza joint of empire scoundrels, Aka: Phone Guy. and Dave is nowhere to be seen.

Dave's relationship with the The Puppet is demonstrated in the premature ending as his "arch nemesis" who consistently thwarts him by resurrecting his victims. Dave voices his frustration with "For God's sake puppet-man", shortly before the puppet activates the Springlocks, forever trapping him in the springlocked suit.

Dave when first opening the game. 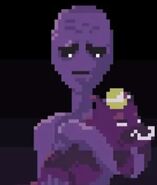 Dave strangling Henry with a string of sausages.

Dave in the Gnarly Ending.

Dave in the Crafty Ending.

Dave in An Ending/Pure Evil Ending.

Dave in An Ending.

Dave in the Radical Ending.

Dave as an eggplant. (A version of the Pickle Rick meme)

Another one of Dave's Sprite Sheets

Community content is available under CC-BY-SA unless otherwise noted.
Advertisement